skip to main | skip to sidebar

This is going to be HUGE!!

So, I know I have been terrible about keeping up with this blog. SOmehow at the beginning of the month, I kinda lost interest in updating. I guess it was partially running out of ideas and partially cause we are about to signing off on our milestone and I was super busy for a couple of weeks. But now I am back!! (althoug I think I am having a cold)

Now I am sure you have all heard of our new full body motion sensing camera Xbox Kinect. It is about to come out later this year. They did a whole bunch of launch title demos for it at E3 this month. Alot of the games are basically XBox versions of the WII sports, fitness and other stuff. However, there is ONE game, that is going to totally blow everybody away! It is going to make us millions and completely change the way games are played! Yes, I am talking about Harmonix's Dance Central. Think DDR but with full body detection!

I was already interested when I saw it at E3. Then yesterday at our weekly mixer, we got the demo in person and it was super fun. At the end of the meeting, we had basically 20 people all dancing at the same time, having a great time! This is going to be the awesomest game ever and totally need to be at the next Veggie Out!! 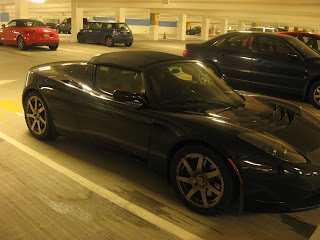 This is a Tesla, a full electric motor in a body of a Lotus Elise. This one belongs to Ninja's Manager. I've also seen a red one around the garage but couldn't find it today. I have decided this is my dream car! I just have to fork out 120k for one of these babies.. 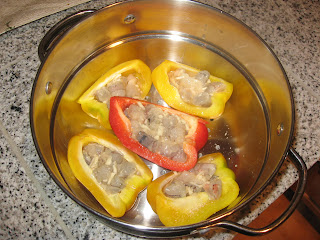 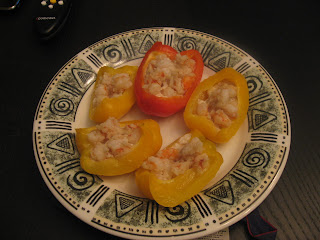 This is Ninja's attempt to make that Pepper/Shrimp dish you can get at Dimsum. It didn't turn out quite as expected since the shrimp meat kinda came apart after steaming. But still tasty lol.

Posted by moonfleck at 10:26 PM No comments: 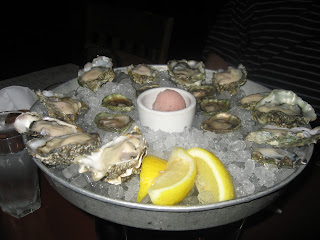 Yes, I know I am extremely wayy behind -_-. It is just a temporary setback. I will catch up again!

My college friend came to visit Snoopy and me this past weekend. We took them to Elliot's Oyster House by the water. They had delicious delicious oysters!

Posted by moonfleck at 10:23 PM No comments: 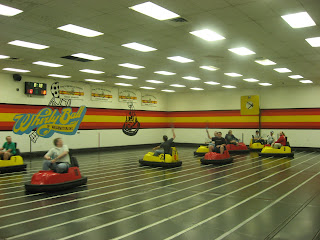 This is my team playing Whirlyball for our morale event. This is the first time I played this bumper car + lacrosse + basketball hybrid. It is really quite fun!

Posted by moonfleck at 1:16 PM No comments: 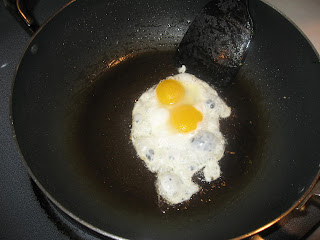 To commemorate this momentous occasion. I am posting a pic of this double yolk egg I cracked the other day. what luck!

Posted by moonfleck at 1:14 PM No comments: 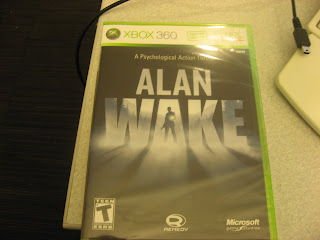 I got lazy again and am behind on posting pics. This is my post 99. We got Alan Wake today, I can't wait to play this. Suppose to be a super scary game. Well by playing, I mean Ninja will play and I will watch under the blanket.

Man, I have to think of something good for post 100!

Posted by moonfleck at 11:41 AM No comments: 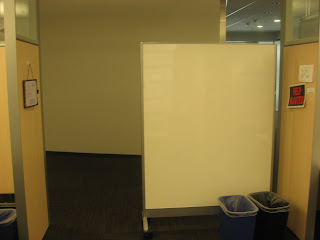 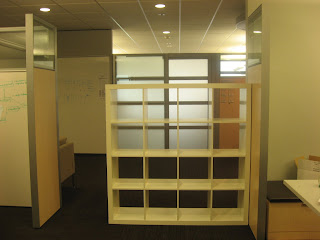 I live in a kind of a open room with 4 cubicles. Since we kind of face the entrance to the stairs we are always in a constant battle to redirect traffic so people don't use our cube as a shortcut hallway. We had the whiteboards up for a while, and today we moved this giant ikea cabinet to the otherside. Lets see if it will help. As you can see behind the cabinet, the cube room next to us had doors installed. bastards!
Posted by moonfleck at 11:35 AM No comments: 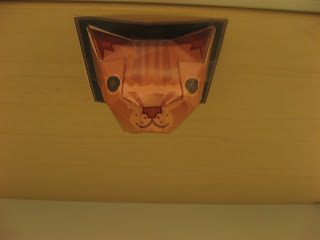 My officemate downloaded and made this pop up paper cat and put it up under her wall cabinet. It is so cute! 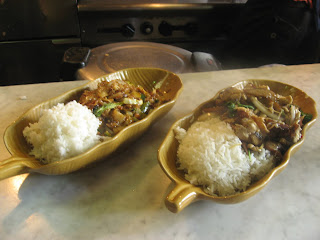 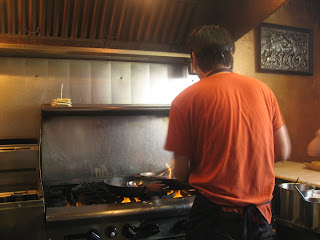 We stopped by the UW street fair this weekend. It was a really gorgeous day for some walking outside. For lunch we decided to eat at Thai Tom, one of the best Thai restaurant in town. Much better than the fair foods. This place is a hole in a wall in the U district. Above is the picture of lone chef cooking at his station. The food was delicious!
Posted by moonfleck at 11:31 AM No comments: 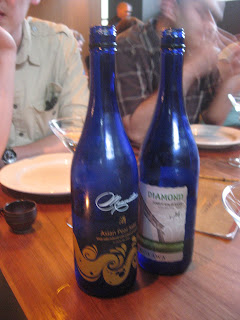 It was my friend Cloud5Six's birthday. We went to Wild Ginger in Bellevue. It is kind of a fancier version of PF Changs. Here is a shot of some sake everyone drank. One is a Ginmai, the other is pear flavored.

Posted by moonfleck at 11:28 AM No comments: 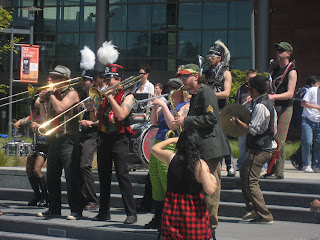 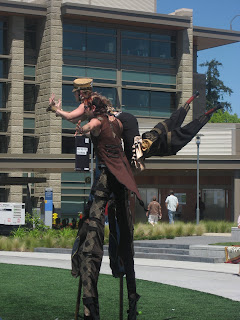 We had a party on our field for the launch of the Kin phone. They invited these punk/circus group? to perform. The band played this funky jazz music while people on stilts performed acrobatics. It was quite entertaining!

Posted by moonfleck at 11:26 AM No comments: 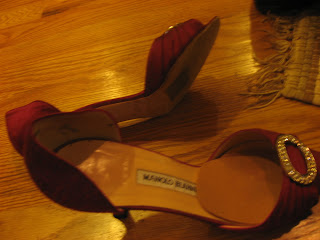 This is my friend Diana's shoe. They are Manolo Blanc. Very fancy and apparently costs at least $400. It is sad that Ninja knows more about shoes than I do.

Posted by moonfleck at 11:22 AM No comments: 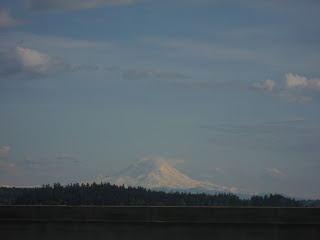 Mount Ranier as seen from the I-90 bridge. 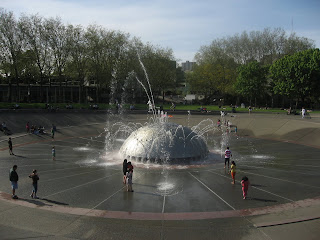 A beautiful day at Seattle Center fountain. WE walked by after watching Iron Man 2 at the IMAX, now that was a pretty fun movie. I really loved all the computer projection that he can manipulate. That is soooo awesome.

Posted by moonfleck at 11:03 PM No comments: 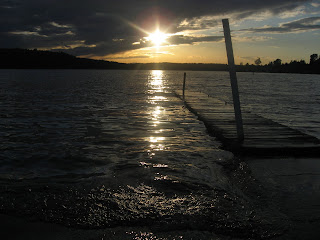 The first beautiful day in ages~ This is sunset over Lake Sammamish. I underexposed it a little here. The actual scene was much brighter. 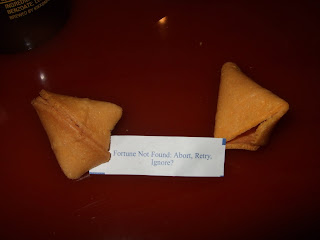 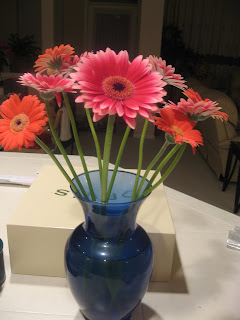 M bought these flowers today. I thought the contrast between the flower and the vase color is really beautiful. 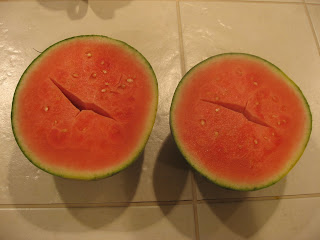 A fine perk of this summer that is in name only. God I hate the weather, typically the day will go from cloudy to rain to hail and then back to sunshine in a couple of hours and it is hella cold all the time. 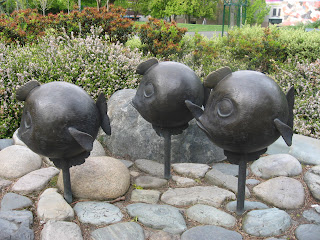 A school of puffy fish outside of the Pacific Science Center. We drove there after work to get Imax tickets for Iron Man 2 this sunday. yay!! This was more of an exercise in playing with camera settings. The table light at Sushi Maru where we ate dinner before seeing Kick Ass. I had to dial down the explosure level way low to get this shot.
Posted by moonfleck at 9:10 PM 2 comments: